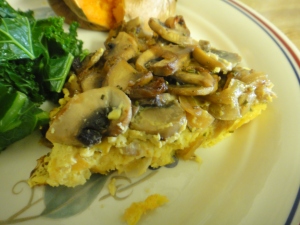 May’s Secret Recipe Club assignment was someone I had been hoping for– VeggieGrettie creates vegan and gluten-free versions of classic dishes (Banana Cake!) as well as some novel mixtures. I couldn’t resist two recipes: a pseudo-fudge, and the chickpea-based savory pancakes below. The fudge recipe probably works very well when you follow the directions, but I used pinto beans and honey instead of stevia and black beans and it tasted like… pinto beans. Of course, I then promptly un-veganed my other selection, defeating the fun of vegan and gluten-free recipes. But, we have chickens, you know, and rural West Virginia is not the place to live if you 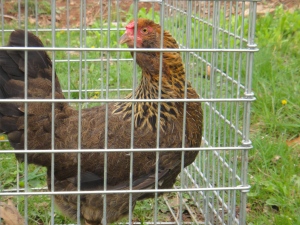 need exotic ingredients like chickpea flour or liquid stevia not previously mail ordered. I also modified the pancake recipe to create one giant baked pancake, making it easier to coordinate a hot supper for all. Nonetheless, I belive the nature of the dish isn’t completely erroded as the mushrooms with rosemary were a delight and the base chock full of chickpea flavor. Click below to view her original recipe.

For those who don’t know, chickpea flour is pretty commonly used in India and even somewhat in Europe. Pancakes are commonly eated in India, while in Italy, you can find cookies made from it. In the US, you may have had it in Indian restaurant without even knowing it. Pakora, or fried vegetable dumplings, are usually made using it. Do store it in the freezer, as it takes on off-tastes quite easily, and use promptly. Mark Bittman helped popularize pancakes from it via his New York Times Minimalist column several years ago, too.

I’m not adding times because we got a new stove (small incident involving me, oven, and flaming feathers… I’ll admit to it at a later date) and it’s wicked powerful. Also, be sure to mince the rosemary finely. It has delightful flavor, but the texture can be distracting.

Prepare the topping by heating 1 T oil in a large sautee pan. Add the onion and cook until cooked through and just beginning to brown. Add the mushrooms, garlic, and rosemary. Cook, slowly, until the mushrooms are just barely undercooked. Add a couple of tablespoons of water if it starts to stick. Remove from heat.

Smash the chickpeas and mix with the remaining oil, water, and eggs. Grease a pie pan, and pour the chickpea mixture into it. Top with the mushroom blend, and bake for 15-18 minutes or until firm.

Secret Recipe Club is a group of bloggers who are randomly assigned another blogger. We then make something from their site, and post about it. I’ve snagged some great recipe, both sweet and savory. To view other SRC member posts, click on the frog below.